Get in on a Secret: Legendary Quintet’s 1971 Album an Overlooked Gem!

Originally released in 1971, The Band’s fourth studio album had the unfortunate disadvantage of standing in the shadows of the more familiar Stagefright, The Band, and Music from Big Pink (also available on limited-edition MoFi hybrid SACD). Historically overlooked, Cahoots stands as one of the group’s finest efforts and includes contributions from iconic pianist/arranger Allen Toussaint and Irish bard Van Morrison, whose feverish duet with Band vocalist Richard Manuel on “4% Pantomime” is the equivalent of two poker players trying to outsmart one another, each more reluctant than the other to blink, give in, and fold. A similar carnivalesque spirit infuses the entire set.

Arguably The Band’s best-ever Bob Dylan cover, “When I Paint My Masterpiece” takes listeners on a carousing trip across Europe, the accordion-driven melodies conjuring the feeling of sailing on the Venician waterways referenced in the lyrics. The fan favorite “Life Is a Carnival” comes on as a celebration of Dixieland pleasures, the sonic jubilee a swirling delight of drunken horns, funky rhythms, and street percussion. And of course, there are plenty of instances of the Band’s signature Americana blend: the delicate beauty of “The Moon Struck One,” the Southern spiritual “The River Hymn.” Throughout, performances are loose but focused, the group’s peerless caliber always at the forefront. If you’re missing this album, forgot about it, or just never heard it, you’re in for a treat.

And there’s never been a better opportunity to experience Cahoots. Remastered from the original master tapes by Mobile Fidelity’s expert engineers, the record sounds more open, detailed, warm, and revealing than ever before. This version is guaranteed to beat Capitol’s digital remaster and bring you right into the Bearsville studio where it all went down.

Don’t delay. When Robbie Robertson asks “Where Do We Go From Here?” on the album, now you know the answer. 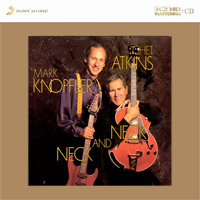 CLIFF JORDAN AND JOHN GILMORE / Blowing In From Chicago – SACD