I come from a musical family from Porto Alegre, in the very south of Brasil. My father and three brothers, all of them were musicians – drummers, guitarists and accordionists. I began playing all three instruments, but I ended up deciding to play the accordion myself.

I started out professionally by playing ‘musica regional’. If you don’t know exactly what ‘regional’ is, it’s a type of group made up of two guitars, cavaquinho, accordion, flute and pandeiro and they used to accompany the ‘calouros’, as the new crop of singers were called, on the radio.

After playing the accordion for some years I began to listen to an American group, the Art Van Damme Quintet. I was totally influenced by that sound and so I formed my first group with the exact same line up – electric guitar, vibraphone, bass, drums and accordion.

Like I said, my first professional instrument was the accordion, but because of a heart problem, I lamentably had to give it up. That was when I started to play the vibraphone, which I played for many years. I only gave the vibes up in 1967 when the quartet broke up and there was no pianist to give me the necessary base for my vibes playing, so I was obliged to start playing piano, which is the instrument I’ve played until today!

My first recordings were for the Columbia do Brasil label – ‘Breno Sauer Quinteto’, ‘Viva O Samba’ and ‘Viva O Ritmo’. Then I recorded for RGE – ‘Sambabessa’ and ‘Agostinho, Sempre Agostinho’ which we recorded accompanying the singer Agostinho dos Santos.

From there on we had a new formation, the Breno Sauer Quarteto, which dispensed with the accordion and was very much influenced by the Modern Jazz Quartet. This line up was the one we recorded in Rio for Musidisc – ‘4 Na Bossa’ in 1965 followed by ‘4 No Sucesso’ in 1966. Later, in Mexico, but with the same group, we recorded with Leny Andrade, Pery Ribeiro and the great flautist Altamiro Carrilho.

In 1967 the opportunity arose for my group to tour Mexico, along with Primo Jr. and we ended up staying there for five years, playing as the Breno Sauer Quarteto, but eventually both the pianist and bassist went home to Brasil. João Gilberto was already there recording in Mexico City, doing shows and stuff but not actually living there. Carlos Lyra was also there when we arrived and there had been talk of us doing his play ‘Pobre Menina Rica’, but Carlinhos went home to Brasil before that could happen. The Tamba Trio were also in Mexico for two periods, once with my great friend Luiz Eça and secondly with the maestro Laércio de Freitas at the piano. Incidentally, my daughter Andrea had a doll at the time with really long legs that she called Laércia after him, she thought he was great!

After travelling extensively throughout Mexico and the Northwestern USA, our drummer Portinho decided to try his luck in the big city and moved to New York. All this time I was travelling with my family, [one daughter from my first marriage, my wife Neusa who still sings with me, and our daughter Andrea], and by 1974 we ended up in Chicago. We settled there because it really was time that the kids went to school and stuff… and here we are until today. Once in Chicago, I started a new group and began to play a lot – this time with American musicians, and some very good ones, too. The first Chicago group was really international – Ron De War [ts, American]; Akio Sasajima [g,Japanese]; Paulinho Garcia [b, Brasilian]; Phil Gratteau [ds, American], Neusa Sauer [vox, Brasilian]; Roberto Sanchez [cga, Cuban] and myself on piano. However, this group didn’t really have the identity or the sound – I went through a lot of drummers. I even brought them from Brasil. Here, in the States, I found it very difficult rhythmically, you know, the Brasilian ‘suingue’. Finally, I got to a point where I found the sound that I wanted and that was the band you will have heard.

In Chicago we recorded another four independent albums this time with a similar line up – trumpet, sax, piano, bass, drums, percussion and a vocalist with the initial name of Made in Brasil. This all came about when we decided to go into a studio here in Chicago to record a direct-cut session, a premixed live recording, just for us to hear how the group flowed together, you know, if there were any defects we needed to iron out and stuff. And this served as a demo for us. At the time we were playing under the name Made in Brasil. Anyway, the owner of the studio loved the sound of that band so much that he got in touch with PAUSA Records and sold them the demo and they released the record on the spot – just like that! And there we were, afraid to say anything that would make us look dumb, so we just went along with it, kept our mouths shut and let the record come out. At this point Victor Meshkovsky appeared on the scene and it turned out that he had a group with the same name, Made in Brasil – only this name had been registered by him! As a result of this we changed our name to Som Brasil – this time registering our name and keeping quiet about the Made in Brasil thing! That really was a painful time – ‘muito’ painful…

With Som Brasil I also changed the format of the group once more. I had David Urban, then Art Davis [tp]; Peter O’Neill or Jim Galereto [ts, ss, fl]; Paulinho Garcia, then Kurt Bley [b]; Luiz Ewerling [ds]; Neusa [vox] and myself on piano. With this line-up I wanted to approach the sound of the Jazz Messengers, but playing Brasilian music. The band spent a number of years playing what I think was some really excellent music.

I think for me the future of [good] Brasilian music is… well, I’d like to have something good to say about it but it’s probably best to wait some more and keep our fingers crossed! 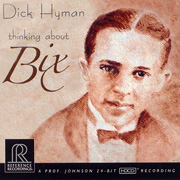 CHRIS ANDERSON / From The Heart